The distinction between ethics and morality is not always clear. It can be easy to fall into the trap of using these two terms interchangeably. Both concepts carry the flag of 'Good', or what we perceive as those actions which are considered "right". While similar, they are not identical. The distinction can be recognized when you link these concepts to other ideas, two other words which take on a more defined shape in our minds: Beliefs and Principles.

Morality can be thought about as a system of beliefs regarding how one should conduct oneself in personal relationships and in society. These beliefs are often influenced by religious teachings, schools of thought and personal values. Ethics, on the other hand, refer to set or system of principles, or a philosophy or theory behind them. In its simplest form, ethics can be thought about as a 'code of conduct'. More deeply, it is considered a philosophical analysis of a moral system.

If morality is more closely linked to 'Beliefs', then it takes on the essence of feeling. If ethics are tied to principles or codes of conduct, then it huddles more closely with reason.

The distinction I just outlined was meant to draw these concepts apart. Let's put them back together. As stated early, ethics can also be the philosophy of morals. You can analyze a moral system, pulling it apart piece by piece and then reassembling it to see a larger picture. A moral belief might be to never kill another human being. An ethical analysis of this might reveal it is immoral not to kill in unique circumstances, such as stopping a shooter who is indiscriminately picking off innocent victims at a shopping mall. In this scenario, what is considered immoral in different light, such as killing another for selfish motives, can now be seen as moral. Here, motive shifts the morality. Inaction becomes immoral. The act of killing a shooter results in saving the lives of others, which is arguably a selfless act and deemed moral.

Now to arrive at what got me thinking about these things. This week the Supreme Court of the United States is considering the constitutionality of gay marriage cases (Proposition 8 and the Defense of Marriage Act). At their core, both cases are visibly divisive. The values of two divergent moral systems are colliding inside, and outside, the highest court in the land.

Here you see a picture of demonstrators arguing opposing views: 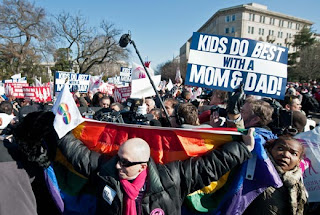 Religious and traditional groups see gay marriage as an assault on their moral codes. Their beliefs are being challenged. If one believes God designates homosexuality as a sin, then of course it falls in line that condoning gay marriage is an immoral act. The opposing argument takes this religious or traditional notion out of the picture and simply asks, "If two people love each other, should they not be granted the same rights as everyone else?"

The only ethical argument (and it is not very ethical) against gay marriage is that love between a man and a woman is the only 'good' love and all other forms of love are evil or sinful. Since some consider homosexual love to be evil, then it is their ethics to deny those individuals the right to marry. The false ethic here is the freedom to deny others freedom based on a personal religious sentiment.

The ethical arguments for gay marriage are plentiful. To grant gay marriage is to grant the ability for two loving people to hold each others hands, walk down the aisle and unite before loving friends and family. It is to grant the shared benefits that married couples currently enjoy: tax, insurance and medical benefits. Quite simply, it is to grant the right for two people to take a loving, committed relationship to the next level, to seal it with a symbolic bond.

My moral code spins around a core belief, or truth. Known as the Golden Rule, or Ethic of Reciprocity, it simply states to treat others as you would like to be treated and to not treat others as you would not like to be treated. Moreover, it is ethical to act against those whose moral codes lack this core truth. When one imposes their morality in a willful or bigoted manner over another, causing harm to that other, for the purpose of reaffirming a moral code, then that morality is most definitively immoral and by all rights unethical. It is perfectly fine to have your own moral system, but you should always consider the ethics of applying it to others.
Posted by Benander at 8:05 PM No comments:

A cell phone sitting idly on the coffee table begins to vibrate and project out some obnoxious digital melody. The device is picked up and the phone icon is tapped with a casual, almost autonomic, motion of the primary index finger. With the phone brought next to the face, the word "Hello" is spoken in a soft, friendly manner. A familiar sound is then returned from the digital speaker. It is the voice of a loved one. The sound,  funneled through the outer ear canal, gently vibrates the ear drum, sending frequencies through the canals and spirals of the inner ear. In an virtual analog-to-digital shift, these signals are translated to nerve impulses by the auditory nerve and passed to the brain stem, ultimately processed in the auditory cortex of the brain. Feedback loops work throughout this rapid transaction, allowing a definitive sound to be recognized. Without knowing the physical and biological mechanisms at play, a smile it brought to the face and you think, Dad.

Sounds affect us in so many ways. Some are abrasive and assaulting, such as the sirens of emergency vehicles or the racket of a busy construction site. Some are exhilarating like the music heard at a local bar or concert venue. Others can be simply mundane: wind, fans, hums, background chatter, trucks and the like. Few, however, are as intimate as the human voice.

The human voice has such a signature quality to it. Sure, some voices can sound similar, naturally or mimicked, but no two human voices are identical. Each person's voice is as unique as their other features: face, body type, gait, smell, personality and so on. However, those other qualities may never touch us in the same intimate way as the voice.

A voice is so remarkably personal. It clicks into our mind from the start and before we realize it we are making judgments. The loudness of a voice generally relates to perceived confidence- a soft, meek sound being associated to a lack of such, or a boisterous sound being a sign of supreme confidence, to the point of possible arrogance. The pitch, or frequency, of a person's voice can affect us is many different ways. Perhaps the easiest example to relate pitch to is the reaction of arousal. A deep, bass-heavy voice exudes strong masculine energy, while a softer, gentler tone can cry out sensual or nurturing femininity. The clarity, or crispness of the sound might influence how intelligent we believe the person to be. Emotion can of course be detected very quickly through the rate or flow of spoken words: Shakiness betrays nervousness or fear; Strong, powerful and quick words throw up the signs of passion or rage; Gentle whispers are the ambassadors love and affection.

Accents play their own role. They effect the 'music' of someone's voice. Words or parts of words, such as vowels, can be sped up or drawn out (especially if you are Southern). Foreign accents can bestow comfort, intrigue, confusion or arousal simply because they sing a foreign or exotic melody in our minds. Accents are also adaptable. I find myself slipping into more of a Southern way of speaking when I'm around old friends in North Carolina. My accent accelerates around my new friends in the Midwest. Most of the time this is unconsciously controlled.

In terms of the power of  the voice (and by this I mean the staying power or affect in your mind), no voice will surpass that of a parent. You heard the voice of the mother and possibly even the father, resonating in muffled tones through the womb before the light of the world shone upon your small and fragile body. As you aged, your parents' voices were directing and guiding you. Additionally, these guardian sounds shaped the own way you speak and how you speak.

It is for the reason above that I feel so very sad and heartbroken to hear my fathers voice slowly morphing and disappearing as Bulbar Onset ALS takes his strength away. He conquers this hindrance with slow, thoughtful and forced words or with the aid of technology in the form of text-to-speech applications on his smartphone and iPad.

While technology assists those who otherwise cannot communicate, as with the example of my father, it also inhibits human interaction because it is taking away the sound of the voice. Emails, IMs, text messages and social media expand the reach and ease of our messages but remove some of the intimacy. When we don't hear each other's voices, we don't hear the strength, tones, accents, sexuality or emotion coming through in one beautiful, unique sound that is the human voice.
Posted by Benander at 5:20 PM No comments: