"No single word in English renders all the shades of toska. At its deepest and most painful, it is a sensation of great spiritual anguish, often without any specific cause. At less morbid levels it is a dull ache of the soul, a longing with nothing to long for, a sick pining, a vague restlessness, mental throes, yearning. In particular cases it may be the desire for somebody of something specific, nostalgia, love-sickness. At the lowest level it grades into ennui, boredom.” 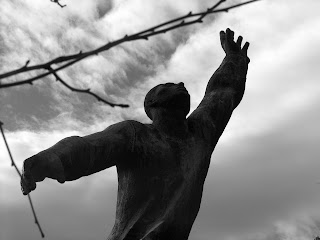 I love discovering a new word. Especially when that word puts a face on, or at least helps outline the form of a deeply complex thought/emotion/concept. Words are the very things that allow us to crystallize the abstract world at our feet. It is even more intriguing when this word is foreign to our own vernaculars. We see more clearly that no one language can possibly encompass all the shades and hues of human experience. I imagine this can be a nightmare for translators, yet it is also the reason I envy multilingual individuals.

What then is "Toska"? The English language lacks a word for this complex concept. Vladimir Nabokov is noted as being the one who most eloquently described it in English terms.

Read the quote above. You can most certainly relate to it on one or many levels. You may have felt Toska at some point and been conscious of it or, you may have also experienced it and not been aware what was winding its way through your spiritual being. You may be feeling it now. "Depressed" does not do it justice- it is too vague. "Existential Crisis" might fit the mold slightly better, but it is underpinned with the might of a philosophical ocean of ideas whose currents pull you away from what the Russians intended.

I think the beauty of this word (of course, understanding that 'beauty' is an odd way to describe such a soul-wrenching thing) is that its vibration is common to us all, regardless of what language or culture we were born into. I see a progression to how Nabokov describes it and will do my best to describe it now.

Think about it as a spiritual or emotional spectrum:

Then think about less as a spectrum and more as a circle, which doesn't always flow in the same direction. All meanings can be present. Some may be highlighted at different times based the flux of the mood. Boredom can lead to indescribable yearning. This yearning can gnaw at your spiritual core until it becomes torment. Conversely, the starting point can be spiritual torment or anguish. This can bend to a restlessness to change, yet the yearning is aimless. Spiritual fuel is burnt and the futility of it leads to surrender. Ennui then takes hold.

The hindrance of language and culture might be at the very core of Toska. The unease sets in when our words falls short. When we want with no object in mind; When we plop our happiness down in another time or place; When we cannot put a face on what is causing that unsettling soulache; That is when Toska rears its ugly head.
Posted by Benander at 9:51 PM 1 comment:

A darkness has descended on the village. A child is sick. The cough started during the last moon and now the fire of the sun consumes the body one moment, followed by the chill of the night's air the next. The elements seem to be at war, forces too strong for this fragile body. The mother is in tears, clinging to the child and speaking the same sounds in a hushed, desperate succession. The others gather silently around, feeling the distress, but powerless to help. Out of the dark comes sounds echoing forward- the crumbling of leaves and the shifting of pebbles. A dark figure emerges, clad in furs and painted with tattoos. In a trance-like state, he walks up to the mother and crouches beside her. With one palm placed on her forehead and the other on the child's belly, the healer begins to chant. A small pouch of herbs is then pulled from his waist belt and inserted under the child's tongue. Water is slowly dripped from a flask on the feverish forehead. Slowly, the chills begin to cease. The shaman cups his hand over the child's mouth. Then, standing up, he extends his cupped hands to the heavens and shouts as the fingers are flayed wide and the dark energy is released. With the child and mother in a state of tranquil exhaustion, he turns and walks back into the darkness.

Stories like the one above are common to all of our pasts. That is one of the beautiful things about shamanism- almost every pocket of humanity has at one point had these archaic forms of healers and teachers. To be a shaman meant to teach, heal and help others see into hidden realms. They would prepare young men for manhood. They would use herbs and elements to bind wounds or drive out fevers. They would induce hallucinations in themselves or others with the use of psychoactive plants to solve an array of emotional or spiritual dilemmas.

Is there a place for shamans today? Relatively easy arguments can be made that the utility shamans once provided is now obsolete. Public and private educational systems foster teaching and learning. Institutions aside, individuals can now teach themselves anything with the click of a mouse. Healing, while not perfect, has become remarkably sophisticated with breakthrough drugs and treatments. Emotional and mental disorders, as they are labeled by the psychological community, can be diminished, or only muted, with powerful drugs and intimate therapy sessions.

Did I just forget something? I believe I did. What of solutions for spiritual pathways? What answer does our modern world have for that? I don't mean to belittle religion's effectiveness, but I have found these offerings provide little beyond spiritual 'comfort'. In that, I mean to say, churches provide a level of spiritual order, like a safe neighborhood for the soul where you recognize others in the same community. Here, you can be both freed and limited- free to explore the meanings of the world within these streets, but limited to see anything much outside of the gates. The shaman would be lost here, for he operates on the other side of the gates.

What then do you do if you find yourself in a toska (I will get to this term in my next post), brought about by a spiritual or existential emptiness? There is no shaman now to carry you away from the village, hand you a wad of leaves to chew, close your eyes and ultimately open your mind. There is no shaman, but there are entheogens.

An entheogen is simply a substance, preferably organic, such as a plant or a mushroom, capable of allowing your mind to connect to something else, generally in the spiritual sense. These can be psilocybin mushrooms, DMT, LSD, peyote, marijuana or others. I am aware of the criminality of acquiring or using these substances. I am also aware of the misuse, abuse and dangers involved in their use. When taken with the proper respect, they can open new doors, new pathways to seeing your world more clearly, or at the very least, differently.

Instead of speaking in vague generalities, as I tend to do on this blog, I will turn this focus inward and become more intimate with myself and anyone still concerned with reading my thoughts. I will speak to my first experience with psilocybin mushrooms.

I first tried these when I was in college, as many people tend to do. Admittedly, I was in a bit of a funk before using them. I was depressed. Being a year from graduating, I saw little meaning or relevance in upcoming adult life. Its vapid emptiness stretched out before me. I saw no spiritual or lasting value in acquiring material wealth, propagating myself or forming a career. Every thought left me more empty and withdrawn. A friend approached me and said, "Let's do these mushrooms together." I was slightly afraid, but something inside me was intrigued. I said yes.

We chose to split a bag- on a piece of  bread with peanut butter to mask the pungent taste. Initially, I felt nothing out of the ordinary. Only ten minutes in, I thought it wise to jump in my car with my friend and take a drive on the Blue Ridge Parkway. A mile down the road, I quickly learned this was a poor decision. The lines on the road, reflected by my headlights, began to glow and shimmer. It felt as if I was in a video game. I pulled over and turned to my friend and said, "We should probably turn around." Turn around we did. We got back to the house and walked up to the front porch to light a cigarette. The flame glimmered and burned, deeper than anything I had seen before. Then, out of nowhere, the neighbor came up to us and began telling an obscure joke. I can't remember the punchline, only that it was vaguely ethnic. I think it was a slight against Polish people, whom I had never met or had any reason to generalize. Regardless, we laughed and then suddenly the porch expanded outward and it felt like I was fifty feet away from the uninvited neighbor. I walked around the side of the house and vomited. My friend found me and led me into the basement, where we proceeded to sit on couches and watch the patterns of hanging tapestries dance and vibrate to the music that was playing from a boombox. I came down several hours later sitting in a convertible car, watching the clouds in the midnight sky, accented by a nearly full moon, slowly return to their natural glory.

Now, this was my first experience. Many others have had their own unique, powerful, profound, disturbing and memorizing experiences with entheogens. I don't claim this to be a fail-safe solution to toska, or spiritual emptiness. I will say that my experience pulled me out of a depression. For one night, I saw the world again as a child sees it- glowing, radiant and astonishing. This perspective hung with me afterwards, like a sublime hangover. I'm not the only one. Numerous studies, primarily European, have discerned that these same mushrooms have consistently pulled people out of depressions.

I believe there is some ancient wisdom to these substances and I wish people to see them for their effectiveness. These aren't "Get Fucked Up" or "Party" drugs. These can reignite spiritual pathways which have been rapidly patched over by the allure of the modern world. We can build ever greater technological advances, but where does that leave us when we continue to feel vapid, isolated and spiritually vacant. Let us find those shamans, wherever they have taken refuge. They still hold a key that is too easy for us to ignore.
Posted by Benander at 7:48 PM 1 comment: